I am a person of Walmart

Keep your lips tightly closed if you find yourself on the verge of snarky muttering, may be great advice, but we all can't abide by that rule. The same goes for snapping shots of those people who do not own a mirror. As my friend, Jenny, a plus size woman, once reported, she accosted another full figured gal in a public restroom, and asked, "What exactly were you thinking when you got dressed today?"

In the same way that ethnic, or religious groups can joke amongst themselves, without fear of a fist to the jaw,  a member of a group, People of Walmart, for instance, are also immune to repercussion. Be warned that I may now post embarrassing photos of friends and family. BECAUSE,

I am a person of Walmart.

The fact that you will not find my picture on the website, does not preclude me from being part of  the in crowd, freak crowd, or whatever that interesting group of folks may be labeled. I might not have been photographed the day that I hit the store dressed as a pornographic pumpkin, but trust me, being that the month was July, and not October, it went beyond cute.

This is me wearing the my pumpkin dress. Note the tank worn underneath, so as not to look like a Halloween flasher. Yes, I realize that orange, worn outside of Clemson tailgaters is not a pretty sight on pale brunettes, but it was either pumpkin or snowman, when I bought the dress.

What was I thinking?

Oh, look, a comfy dress to wear all summer, and the base of a Halloween costume come fall. I must scoop this up before other women steal the idea, and the entire neighborhood greets trick-or-treaters clad in bright orange, with a green beanie on their heads.
Yes, it must have been something along those lines, because never before have I worn orange. 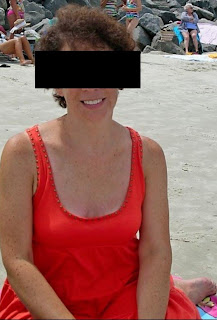 In the quest to brown more of my skin, I hit the beach for a walk with a friend. Did I wear a tank underneath? No, no, no, as that would have covered a few inches of flesh, thus preventing tanning. As we stroll, I tug more than a few times to cover my bra, the strapless variety, which as any woman will tell you, was invented to annoy, but for the most part, the walk is unremarkable.

Can we run to Walmart?

Upon hearing those words, an alarm should have sounded, telling me that sweating in a car would be less of a punishment than stares. Silly me bounds from the vehicle, boobs popping out of the dress, and grabs a cart. I concentrate on the shelves, pretending that someone may or may not be taking my picture. The teenage boys that point and giggle, well, they are just wishing their moms...oh, never mind. It was bad.

Rit to the Rescue
The humiliation was too much to bear, but not enough to part with the dress. Pumpkin might not be my style, but grape could be. Grapes are cute. Just think of the California Raisins. Did you ever see a dancing pumpkin? And, of course, I drink wine a lot more often than I eat pumpkin pie. No, that was not the reason for the initial dress purchase. I shop sober, really, I do. 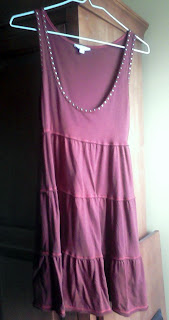 A quick bath in dye, left my dress transformed.
If waiting until spring for my grape debut on the beach, is too far off for you, I can be found on You Tube performing as a raisin.
Posted by Unknown 12 comments:

Last winter, when my father, and his wife, were making their annual trek south, they stopped by for dinner. Knowing my father enjoys meat, I prepared two types of chili. While I can't say I was enamored with this dish, it was a huge hit with my guests. Being that my dad is 79, and has consumed many bowls of chili, I would think he knows his stuff.

In a large skillet, using 2 tsp of olive oil, cook turkey and vegetables over medium high heat, breaking up the meat and browning it.
Add the rest of the ingredients, except beans, and corn, if used. Cook five minutes.
Stir in beans, and corn, and heat until hot.
4 servings

While it might be more aptly referred to as dressing, since I don't stuff the turkey, in my mind, it is stuffing, and it must be made with the recipe below.  I used to make this for Thanksgiving every year, along with cranberry relish (recipe below), mashed sweet potatoes with bourbon, and a scrumptious spinach casserole. Now that family is scattered,  it is every man for himself, and I may never need to touch another dead bird again.

That's right, y'all can have your turkey. I will never understand the appeal. The side dishes are king. Besides, pulling out that bag of innards, is a nasty job. I wear gloves, and then I figure they are full of germs, and I throw them in the trash. Being wasteful then puts me in a bad mood. Who knows what I then do to the food.

Last year I served beans, and cornbread. The year prior, Indian food was on the menu. This year BG wants to make spanakopita as the main dish, and pumpkin pie as dessert. That sounds like an interesting combo.

In a skillet, cook carrot, celery and onion in butter until tender but not brown.
Stir in sage, cinnamon and pepper. In a large mixing bowl, combine bread cubes, apple, walnuts and wheat germ.
Add cooked vegetable mixture.
Drizzle with enough chicken broth to moisten, tossing lightly.
Use to stuff one 10 pound turkey, or bake in a casserole, which is what I do.
Makes 10 servings.

Pick over cranberries and rinse them. Chop coarsely by hand or in food processor.
Scrape cranberries into a bowl, and add the onion.
Chop the raisins and add to cranberries.
Combine the rest of the ingredients, except for the lemon juice, in a small saucepan.
Heat the mixture, stirring, over medium heat until it is quite hot, and the sugar is dissolved. I
Pour the hot mixture over the cranberries, onion, and raisins.
Add the lemon juice and mix well.
Cover and refrigerate overnight before serving.

Linking to some of these great sites:
Posted by Unknown 6 comments: