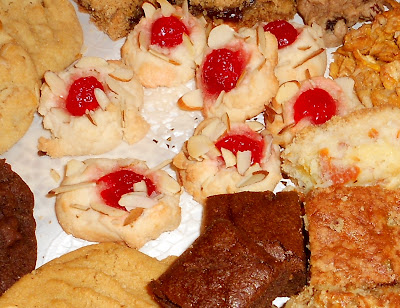 Ignore the greasy doily, and focus in on the adorable cookies with the bright red cherry centers, and the almonds haphazardly sprouting from their sides.You can also ignore the food coloring, which gives the maraschino cherries their happy look, transforming a healthy fruit into...just kidding.

Sugar, and fat, people, it tastes great! In the case of these cookies, it tastes AMAZING.

These yummy morsels, which at a recent gathering, my future son in law scarfed down at an amazing rate, only surpassed by my own cookie gobbling performance, were made from this recipe. The hardest part of the recipe was finding the almond paste in the grocery store. You don't even have to get out the flour. Nope, these babies are flour free. You could even leave off the maraschino cherries, and have yourself a tasty cookie. The cuteness factor would be diminished, but once that sucker hits your mouth, you won't notice.

In an attempt to take a mental break from important matters, i.e., gay marriage, women's rights, health care, education, separation of church and state, and all those other issues that keep us self-righteous, bleeding- heart liberals* awake at night, I have been busying myself with sharing recipes of the sugary kind.

Don't get me wrong, I really, really, really love to bake. It's just that when I am not posting pictures of goodies, I spend a lot of time talking to my friends, and for the most part, my friends are other BHLs.

It occurred to me today, when a friend on Facebook posted the exact same article that I had just finished reading, that we need more recipes. Okay, that wasn't my first thought. My first thought was to run outside, just in case the neighbors, who are almost young enough to be my children, are curious what middle aged women are packing in their bras. 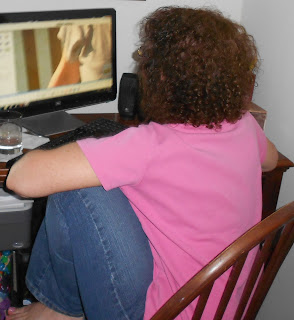 Me, in the only pink I show in public

The article was about women in New York City, who, using a loophole in the law, walk around topless. While I do often spend time naked at home, I draw the line at walking past the end of the driveway, without at least undies.


* "Bleeding-heart liberal" is the moniker given to me by one of my friends during a conversation a few days ago. I called him a Republican. That infuriated the man, whereupon he started screaming that he was a Democrat. I was just teasing him. It's how I get my jollies, since I am forced to wear clothes when I leave my house. 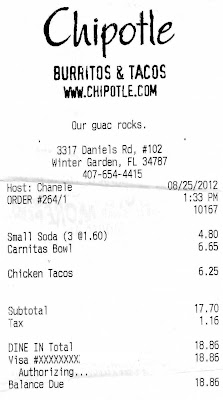 The other article that caught my eye, was about Chipotle, being caught rounding up so as to save their employees time in making change. Yes, pennies are annoying, but there's that whole dishonesty deal to consider.

Having eaten at Chipotle last Saturday, I checked my receipt, and nope, nope, there wasn't any rounding happening. Of course, the restaurant would have lost a penny in this case.

And NOW, back to the sugar. 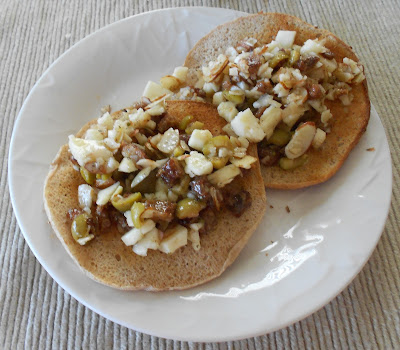 This was very yummy, although very sweet. A bit less honey could be used with good results, if you would prefer less sweetness. It really is more of a dump it on the bread deal, and not a spread. Or, it could be an eat it with a spoon sort of thing. Not that I would know anything about that sort of behavior.

In a serving bowl gently stir together feta, almonds, dates, olives, and lemon peel. In a small bowl combine honey and cayenne. Warm in microwave for 15 seconds. Drizzle over spread; fold gently to combine. 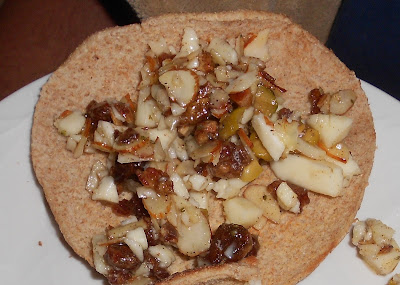 I served it on toasted bread rounds.

Modified from the original BHG recipe. 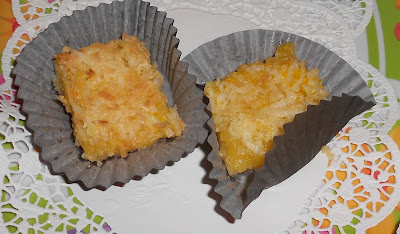 While the rest of us love lemon bars of any variety, PG adores Krusteaz Lemon Bars. When she visits, she sometimes brings a box with her, so she can bake. When she arrives with a box, I whip out my camera, because my children, no matter what their ages, enjoy me constantly taking pictures. They just complain for the fun of it.
The Krusteaz Lemon Bars were always a staple dessert at grandma's house, and remind PG of her childhood. This from scratch recipe has the added twist of coconut. As a huge lover of coconut, I really liked these. PG remains a lemon bar purist. Oh, well. 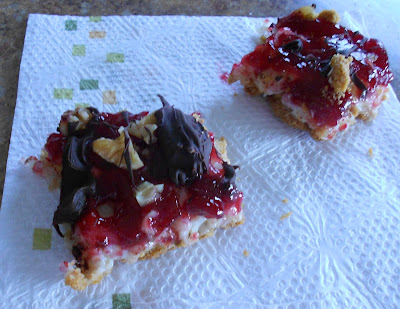 When reading recipes, certain ingredients always signal yumminess. Sweetened condensed milk is one of them.  The removal of water, and the addition of sugar, could not result in anything less than a super yum. Am I right?

Sugar tastes good. Water doesn't really have a taste. Well, in theory, it is tasteless. If you visit me, and I want to insure a short stay, a glass of our tap water, will have you running for the door.

My large plops of chocolate didn't make for a gorgeous presentation, nor did the napkin, and poor lighting, but the combination of raspberry, and chocolate, more than makes up for that. Use your imagination, and taste the gooey delight of these confections.  Come on people..raspberry, chocolate, and coconut! Need I say more?

Sugar and spice
And everything nice,

That's what Lisa's blog is made of

Do people find my blog by searching for:

Are these euphemism for sugar filled recipes? 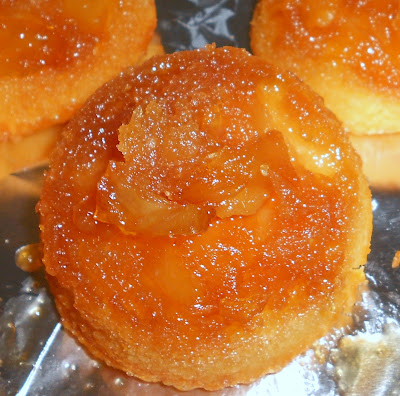 
Preheat oven to 350 degrees F.
Spray 24 muffin cups with non-stick spray.
Drain canned pineapple, reserving liquid in a glass measuring cup.
Combine butter and brown sugar. Evenly spoon mixture into muffin cups.
Top with 1 tablespoon pineapple.
Place cake mix and eggs in large bowl. Add juice/water, and oil.
Beat for 30 seconds on low. Continue beating for an additional 2 minutes on medium.
Divide batter among muffin cups.
Bake for 20 to 25 minutes.
Allow to cool  in pan for 2 minutes and then invert onto serving platter.
Marvel at the gooey treats that await.
These freeze well. 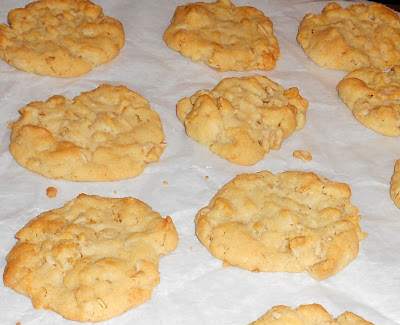 In the middle of a cookie baking frenzy, I remind myself that it would be prudent to invest in some Silpats. Not only am I wasting money on roll after roll of parchment paper, but very soon, my guilt over deforestation...oh, never mind. Just bake some of these cookies, which were a childhood favorite of mine.

Linking to some of these great sites:
Posted by Unknown 7 comments: 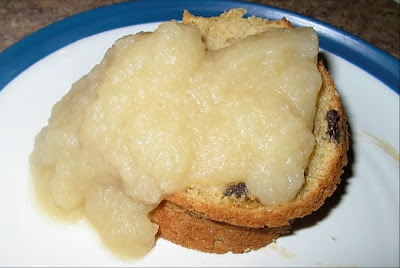 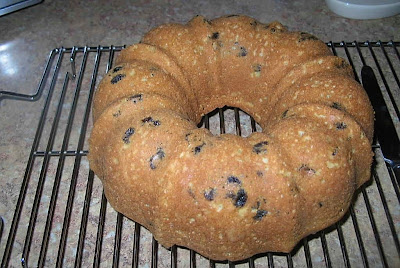 My mom always served pound cake with plenty of cold applesauce on top.
I have been told this is odd.
Try it, anyway.

What are some of the quirky ways of serving food that your family has?

Bake at 350° for 38 minutes or until a toothpick inserted near the center comes out clean. Cool for 15 minutes before removing from pan to wire rack.  Cool completely. Serve with applesauce. 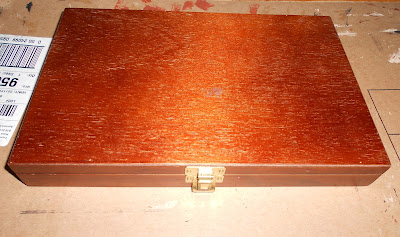 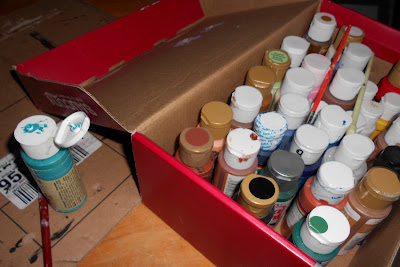 In an attempt to inject a bit of color into the black, and cream color scheme of the bedroom, I decided to paint a wooden box. Turquoise has been my favorite color for a few months. Since SH has vetoed repainting the bedroom walls, at least for another few years, and then "NOT TURQUOISE", I am limited in my approach. 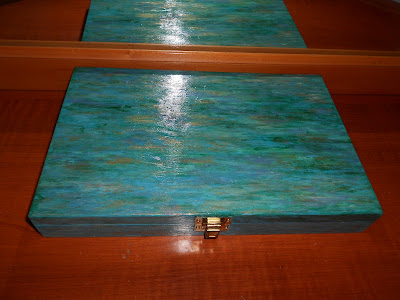 Slapped a bit of paint on, and ta-da, a painted box. 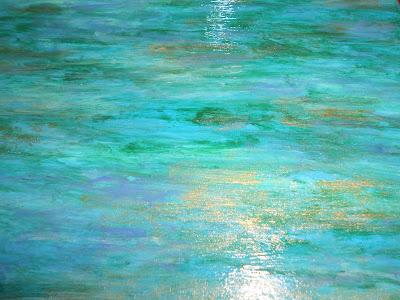 The light bouncing off of the paint.reminds me of the sun hitting the water, or if you must, some paint slapped on a wooden box. Either way, it makes me smile.

Email ThisBlogThis!Share to TwitterShare to FacebookShare to Pinterest
Labels: DIY 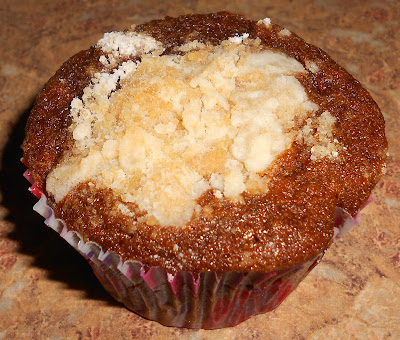 Shoofly pie (or shoo-fly) is a traditional Pennsylvania Dutch molasses pie. It has been twenty one years since I have tasted the pie, but I remember thinking it was delicious.  I unfortunately equate that experience with mice, since after we dined at an Amish restaurant, I stopped at a bakery, and bought a bag of cookies. When we arrived home, I went to place the cookies in my pantry, only to have a furry creature scurry past my hand.

After I stopped screaming, I grabbed my three year old daughter, waved to my husband, and barked out orders about finding that effing mouse, and killing it. Until then, I would be sleeping at my mom's house, with our daughter.
Years later, my husband admitted that after he trapped the mouse, he relocated it to the woods. Argh!

The cupcake version, which I whipped up twenty one years after the mouse incident, is a Taste of Home recipe. It was a hit with my family, and with my husband's co-worker's. If you like gingerbread, you will enjoy these egg-free goodies.